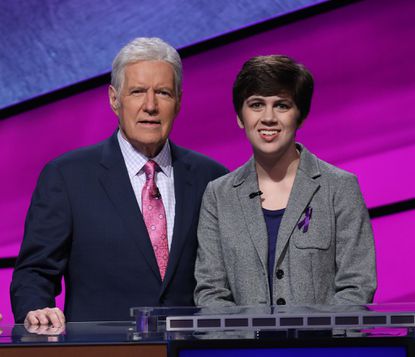 Gaur later addressed his resolution on Twitter, explaining Trebek had simply shared with the contestants he had reentered remedy. "Alex Trebek getting choked up all over Final Jeopardy this day messed me the general contrivance up".

Alex Trebek appeared to tear up on Monday's episode of "Jeopardy!" after a contestant used his response to a prompt to convey the message "We love you, Alex".

In lieu of an answer to the question, contestant Dhruv Gaur, a college student at Brown University, wrote "We love you, Alex", with "love" being shown as a heart.

"That's very kind of you, thank you". Watchers apparently felt the same way, and the hashtag #WeLoveYouAlex trended on Twitter soon after.

Trebek introduced in March that he had been diagnosed with Phase four pancreatic most cancers. "I plan to beat the low survival-rate statistics for this disease".

In May, he reported that he was "near remission".

In August, Trebek announced that his treatments had ended and that he would return to host the 36th season, which started airing in September.

According to Alex Trebek's IMDb profile, he has hosted 7,987 episodes of the show since 1984. "That was a bit premature and certainly overoptimistic. I know that. I'm not going to delude myself". "My numbers went south - dramatically and quickly".

It's not clear when this episode was taped, as it is a syndicated show that tapes a number of episodes over the course of a few days.

Tell us what you think!

'There are moments when, for no reason at all, I feel this surge of sadness, depression, ' he said.

Monday marked the first of three semifinals in this year's Tournament of Champions on "Jeopardy!" which saw Chicago's Emma Boettcher become the first to qualify for the tournament's final later this week. "We were all hurting for him so badly", he wrote.

During the Final round, Dhruv offered a sweet message of support to Alex.

"I'm simply very grateful I acquired the chance to say what I do know everybody was considering".