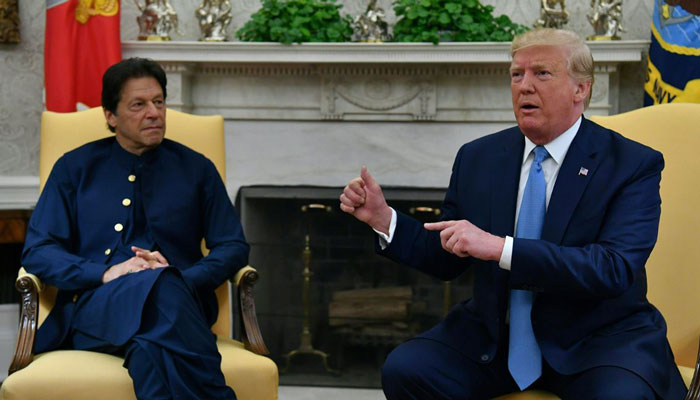 The Ministry of Foreign Affairs, in a statement, said: "Qatar, in addition to its extensive efforts as mediator in the US-Taliban peace talks, has played an instrumental role in facilitating the release of the professors and Afghan detainees and maintaining continuous cooperation between all parties".

According to the statement, Imran Khan reiterated Pakistan's commitment to peace in Afghanistan.

The prime minister during the conversation also apprised President Trump of the prevailing situation in Indian-occupied Kashmir, where he said more than eight million people remain under siege over 100 days after New Delhi revoked the region's special autonomy.

Appreciating Trump's continued engagement as well as mediation offer, Imran stressed that the United States president must continue his efforts for facilitation of a peaceful solution of the Kashmir dispute.

Recalling their conversations in Washington and NY, the two leaders agreed to deepen bilateral collaboration, including at relevant multilateral fora.

After the release of two professors this week, President Trump called to thank Imran Khan in view of facilitation extended by Pakistan.

The legislation comes after President Trump in September declared peace talks with the Taliban "dead".

It was widely thought that the release of American Kevin King and Australian Timothy Weeks, who had been held hostage since August 2016, could lead to a resumption of U.S. -Taliban negotiations.

In reaction to the phone call, a spokesman for the Taleban, Zabiullah Mujahid, told DPA that once the U.S. left Afghanistan, the Taleban will talk with all Afghan sides, but not with the Afghan government as a "legitimate state". We hope this step gives a boost of confidence to all parties involved to re-engage in the peace process.

The Premier continued, "As part of its policy of supporting initiatives for a negotiated political settlement of the Afghan conflict".